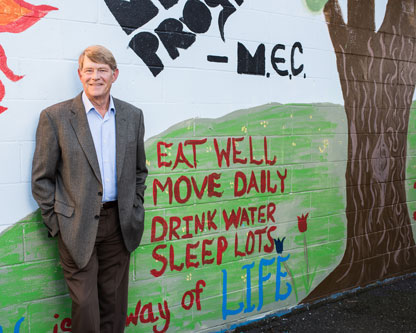 Jeff with mural painted by students from Miller Education Center

Jeff was born in Portland and spent his early childhood years with his parents, Fred and Corrine, and siblings in the St. John’s area.  In l960 his family moved from St. John’s to West Union, a small farming community just north of Hillsboro.

Jeff attended West Union Grade School, Brown Jr. High School and Hillsboro High School.  At age 17, he traveled throughout the South Pacific for 2 years on a “working holiday,” returning to the Portland to complete his high school diploma from Portland Community College (PCC). Jeff continued his education receiving an Associate Degree in Mechanical Engineering from PCC in l977 and completed a Bachelor of Science in Mechanical Engineering from the University of Portland in l981.

After College, Jeff immediately began his career accepting a job as Project Engineer with Cal-Pacific Drilling Company in Ventura, CA. where he handled the fabrication and assembly of drilling rigs and was a rig-hand (roughneck) for eighteen months operating and maintaining drilling equipment.

Returning to Portland in l983, he started work at Bird & Son Roofing Company as a Project Engineer managing the engineering and maintenance departments. Less than a year later was promoted to Plant Engineer.  In l985 he joined his family’s business, Columbia Trailer Co., Inc., where he started as a welder on the shop floor. In 1987 Jeff moved into sales position representing Columbia Trailer products to the Logging, Wood-By-Products and Solid Waste Industries.  In l996 Jeff was elected to the company’s Board of Directors and in 2000 was made Marketing Director.  In January 2011 he became President, C.E.O. and Co-Chairman of the Board of Directors. In 2013 Columbia began fostering new relationships in the Persian Gulf with the National Oil Company of Abu Dhabi (UAE) as well as other new international companies.

In 2012 the company received the highly prestigious Business of the Year Award from the Chamber of Commerce of the Greater Hillsboro Area. The award recognizes achievement in business practices, contributions to their industry and high level customer service as well as a demonstrated commitment to the welfare of the community through financial contributions, personal service and civic leadership.

Jeff has a deep-rooted sense of community spirit and has proudly served on several local nonprofit boards.  A Director of the Hillsboro Community Foundation since 2005, Jeff served as Board President from 2013 to 2015.  He has also been a Director of PCC Foundation since 2004 serving as Board President in 2012 and a Director of the Hillsboro Chamber of Commerce.  In 2012, Jeff was honored with the PCC Diamond Alumni Award in recognition of his professional achievements and his commitment of time, talent and resources to the College.

While studying at PCC in l976, Jeff met his wife Kathy. Their mutual love of horses, sailing, Labrador dogs and especially children lead to their elopement on St. Valentine’s Day in 1982. They have two daughters, Michelle and Jamie, and are blessed with six grandchildren.