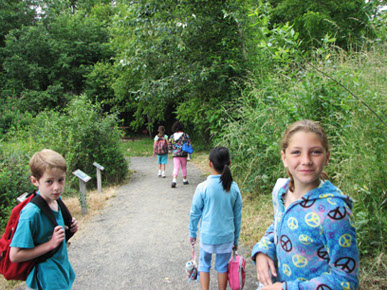 Jim Harp, a founding board member and former president of the Hillsboro Community Foundation, was passionate about efforts to revitalize Jackson Bottom Wetlands, a 3000-acre tract of land south of Hillsboro.

Early settlers used the land at Jackson Bottom for hunting and food gathering, but in more modern times (and until quite recently), the general opinion was that wetlands were wastelands with little economic value. As a result of that misconception, filling and draining ruined more than half of America's wetlands. Jackson Bottom did not escape abuse either. Before revitalization efforts gained footing in the 1970s, it had become a dumping ground for cannery waste and construction debris.

The campaign to clean up the area and increase wildlife habitat evolved into a concerted effort to convert Jackson Bottom into a community asset. The Greater Hillsboro Area Chamber of Commerce, the Department of Environmental Quality, the Oregon Department of Fish and Wildlife, the Tualatin Riverkeepers and the Audubon Society held a joint meeting and formed a steering committee to spearhead the effort.

With Jim Harp leading the way, the Hillsboro Community Foundation played a critical role in development of Jackson Bottom Wetlands Preserve, a 710-acre portion of Jackson Bottom dedicated as a wildlife sanctuary and educational resource. Beyond its service as a catalyst for converting the property into a local treasure, the Foundation was responsible for acquiring approximately 7 adjacent acres, where eagles are currently nesting, as well as 23 acres next to Dairy Creek. The Foundation also provided financial support to fund the master plan for the Preserve and construction of its first viewing station.

Jim Harp passed away before the Foundation's work at the Preserve was complete. Robert Evans, a fellow Hillsboro Community Foundation board member, was serving as chair of the

Preserve's capital campaign to raise money for an education center when the Foundation made a $25,000 contribution in Harp's memory.

The 12,000 square-foot Education Center was opened to the public in September 2003, and Jackson Bottom has been successfully restored to an ecologically thriving wetland community. Over 25,000 people from Oregon, other states and countries around the world visit Jackson Bottom Wetlands Preserve each year for education, exploration and research. The Preserve is recognized for its exemplary programs, habitat restoration, and community partnerships, and serves as a model for similar projects in other areas.