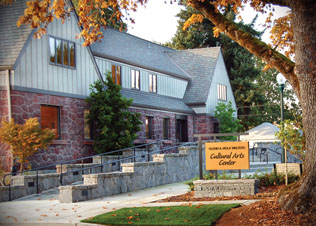 Located in downtown Hillsboro, the Glenn & Viola Walters Cultural Arts Center is a beautiful facility providing a focal point for visual and performing arts within the community. Originally a house of worship, the 15,664 square-foot building - an architectural landmark in and of itself - has been carefully renovated to showcase musical, dance and theatrical performances, as well as the works of fine artists. Aside from its main performance auditorium and galleries, the Center also houses several art studios where people of all ages gather for classes in painting, drawing, sculpture and literary and performing arts.

The Center, which opened in 2004, is the result of many individuals, businesses and organizations working together toward a common goal. While developing its “Hillsboro 2020 Vision” plan, the community identified arts and culture among its priorities to ensure enhanced livability and support downtown revitalization efforts. At about the same time, informal discussions began among board members of the Hillsboro Community Foundation regarding the need for a cultural arts center. There was no such facility in the city of Hillsboro or Washington County.

Glenn Walters, then a board member of the Hillsboro Community Foundation, initiated discussions with the City's Parks and Recreation Department to explore possible sites for a cultural arts center. Not long after, the Trinity Lutheran Church became available for purchase. With its beautiful, hand-quarried stonework, ample space and downtown location, it was a perfect fit. And, parishioners concerned about the future of the building they were leaving behind were happy to learn that its integrity would be preserved as a new and sorely needed home for the arts.

A generous gift of $1 million from Glenn and Viola Walters to the Hillsboro Community Foundation to purchase the church facility and adjacent properties enabled the city to move forward with the project. There remained, however, much work to be done. In addition to the $1.3 million purchase price, approximately $2 million in renovations were needed in order to bring the building into compliance with current codes and adequately prepare the facility for use as a visual and performing arts center.

A community fundraising campaign was launched to help pay for the renovations, but by late 2002, efforts slowed to a point where the Center would not be completed in a timely manner without additional funding sources. The Hillsboro Community Foundation then agreed to spearhead fundraising and committed to raising the additional funds required to complete the facility. The Walters Cultural Arts Center has served as a warm enhancement to the cultural life of Hillsboro and has been visited by thousands since opening in 2004. The Foundation continues to support programming at the Center through its ongoing fundraising efforts.