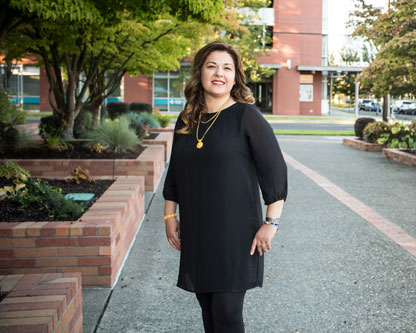 Funda in front of Tuality Healthcare - An OHSU Partner

Funda joined the Board of the Hillsboro Community Foundation in 2013 when former HCF Board member Don Suhrbier piqued her interest in the organization. She believes that HCF is the perfect place for her to continue to serve the community by giving back a small dividend for all of the opportunities that she has been afforded.

Born and raised in Ankara, the capital of Turkey, Funda has roots in several small, family-run businesses.  She started her own business career at Basak Insurance Company, a State owned insurance group, while attending Hacettepe University as an undergraduate student.  Funda received her B.S. degree in Business Administration in 1993 and remained at Hacettepe University after graduation when she entered their MBA program.  In addition to her studies, Funda worked as a research and teaching assistant in the Accounting and Finance Department of the Business School.

Upon completion of her academic requirements, Funda moved to Istanbul to work for Interbank in their International Loans Department.  In 2010, she received her MBA from Hacettepe University after defending her thesis on “Transformational Leadership and Emotional Intelligence.”

While in Turkey Funda also attended the Ankara State Conservatory where she received formal training as an opera singer.  She is fluent in Turkish, English and German.

Funda and her husband have two children, Kyla and Conrad and reside in Hillsboro.  In her free time, Funda enjoys travel, tennis, is an avid reader, preferring history and biographies, and practices riding her motorcycle on ‘safe’ country roads.  She is an FAA licensed pilot and currently holds a Private Pilot License.